Today, Hyderabad is the largest city in Andhra Pradesh (A.P.) State and its capital city. The prior statement does not clearly show the difference in development between Hyderabad and other cities in AP like Vishakapatnam, Vijaywada, Guntur, Kurnool, Tirupathi, Warangal and Karimnagar. On many parameters Hyderabad is way ahead of other cities from A.P.  on parameters like population, infrastructure, public services, cosmopolitan outlook, education, presence of institutions of repute and quality of living.

If ones goes out to any other city in A.P. – the outlook is NOT cosmopolitan.  Barring Vishakapatnam, the others are still rustic agricultural towns. 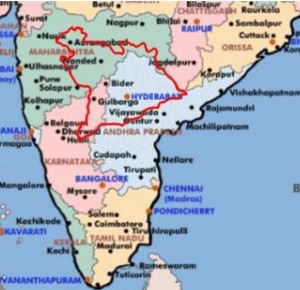 One of the reasons for the cosmopolitan outlook of Hyderabad could be that the Nizam’s territory included populations having different mother tongues – the erstwhile Hyderabad state now covers present day Andhra Pradesh (mostly Telangana area),  parts of present day Karnataka and a significant part of present day Maharashtra (upto Aurangabad). Since the Nizam was originally a Governor of the Moghuls (based out of Delhi), there was lot of North Indian influence on Hyderabad. Being the Capital of erstwhile Hyderabad State, it was the nerve center and had visitors from all part of the  Hyderabad State. It would also have regular visitors from the surrounding kingdoms. This history created a foundation for a cosmopolitan outlook as seen in Hyderabad today.

Many old timers who went to good schools (mostly used to be Missionary or Convent schools) had an almost equal number of Hindu, Muslim and Christian classmates. This forced the brightest people from Hyderabad to get to know other cultures early in their lives, thereby cultivating a cosmopolitan culture in Hyderabad.