Osman Ali Khan Asaf Jah VII was the last Nizam of the princely state of Hyderabad who ruled Hyderabad from 1911 to 1948. Hyderabad under his rule witnessed many cultural, economic and administrative reforms. Although praised for many of his developments, he is very infamous for his Razakar movement where he was accused of spreading violence.

Born to Mir Mahboob Ali Khan Asaf Jah VI, Osman Ali Khan became apparent heir to the throne of Hyderabad after death of his elder brother in 1887. Many eminent scholars were engaged to teach him Urdu, Persian and English. He was a great scholar and wrote poetry in Persian and Urdu. 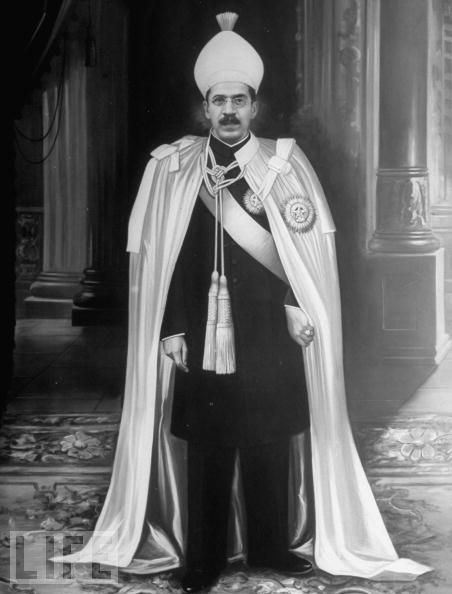 Richest man in the world:
Mir Osman Ali Khan succeeded his father Mir Mahboob Ali Khan on his death in 1911. The state of Hyderabad was the largest of the princely states with an area of 86,000 square miles or 2,23,000 sq.kms, which is nearly the size of today’s United Kingdom. Nizam was considered as the richest man during his days. He is Fifth on Forbes ‘All Time Wealthiest’ list of 2008. He was even featured on the cover of the 1937 ‘Time’ magazine. It was estimated that he had $2 billion fortune in early 1940s.

Developments under his rule:
One of Nizam’s first assignments after he ascended to throne was to take Mokshagundam Visweswaraiah’s advice on how to control the floods and use the excess floodwater. He undertook work of embankment of the Musi River and constructed Osman Sagar and Himayat Sagar Dams at Gandipet on Visweswaraiah’s advice. It was because of his foresight and commitment to the welfare of his people, old city suffered minimum damage in the recent floods. He also undertook some irrigation projects on the Tungabhadra River.


It is said that upto 11 percent of the Nizam’s budget was spent on education. He set up many schools, colleges, universities including Osmania University and even a ‘Department for Translation’. He made primary education compulsory and provided free of cost education to the weaker sections of the society. He made immense donations to many institutions such as the Jamia Nizamia, the Darul Uloom Deoband, the Banaras Hindu University and even to some universities abroad.

The Nizam was responsible for starting earliest public sector undertakings such as Nizam Sugar Factory and Singareni Collieries. He set up the ‘City Improvement Board’ and replaced slums with planned colonies.

Mir Osman Ali Khan started his own bank called the ‘Hyderabad State Bank’, which is now referred as State Bank of Hyderabad. Hyderabad was the only state which had its own currency, the Hyderabadi rupee, in British India.

6 comments for “The Last Nizam of Hyderabad”