Biryani is a part and parcel of many lives in Hyderabad. Almost every Hyderabadi, irrespective of the caste and religion celebrates special occasions like weddings, birthdays and even some festivals with biryani.

For an outsider this craze for biryani may look mysterious but once he/she tastes the authentic biryani, they will surely admire it. But most of the outsiders and even some people living in Hyderabad, particularly at outskirts are always confused whether to eat mutton or chicken biryani.

Whether to eat mutton or chicken biryani depends on type of the restaurant. Many hotels, restaurants and Irani cafés in the twin cities serve biryani. But in a good restaurant and during regular hours the quality of meat is good. 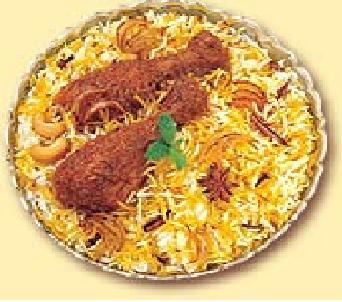 Chicken is much cheaper than mutton. You can get 1kg of chicken at around Rs.120 at retail market, whereas mutton costs around Rs.240 per kg. So you get more meat with chicken biryani than with mutton biryani. Many restaurants either do not use good mutton or give only limited meat quantity due to its cost. This affects the eating experience.

However, when you cook biryani at home, always go for mutton biryani. It is the original one. Meat of the Telangana goat is considered as one of the best in the world. The semi arid vegetation of the Deccan plateau with its rolling hills, boulders and volcanic ash is a great place to rear goats. In deltas where land is fertile and no free land exists like in coastal Andhra, goats are not very common.

Chicken is a very late entrant in Hyderabad. It is not uncommon in old time Hyderabadies to not eat chicken at all or dislike it. It was not part of the regular meats in Hyderabad till barely a couple of decades.