Indian Champion shuttler Saina Nehwal, was awarded with the nation’s famous civilian ‘Padma Shri’ award for the year 2010. She dedicated the award to her parents.

In August 2009, Nehwal was awarded the Arjuna award for her wonderful performance in the game. Most of her success can be attributed to her discipline. What makes Saina different from other girls of her age is best demonstrated by her daily routine. Early in the morning, when many girls make their entry into the city for early morning tuitions and coaching classes for popular courses, Saina goes in the reverse direction, to distant Gachibowli located in the outskirts of Hyderabad to practice badminton. 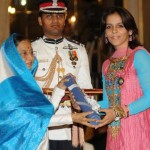 Saina Nehwal is popularly friendless, but not lonely. It is in absolute contrast to her more-famous more or less nominal, Sania, who attracts more attention. Saina creates the news for not creating the news.

Saina Nehwal became the first Indian woman to reach the Olympic singles quarterfinals in Beijing. She also reached her career best, world no.5 in recent rankings.