The auto industry has expanded vastly in India in recent times. Many companies are launching new models according to the roads and the needs of the traffic as well as the customers. As of now, the current market of auto is focusing mostly on the small cars in view of the roads and for minimizing the traffic congestion. Apart from the new models, the companies are making advancements for the existing models for the better market to be prevailed.

Maruti Suzuki, one of the leading auto maker in the field of auto industry in India, made enhancements for delivering automatic transmission to the existing Maruti Suzuki A-star. Initially Maruti Suzuki A-Star was launched in 2008 with 1.0 litre KB series engine. Many of the customers started using it because of its advanced and safe driving features. 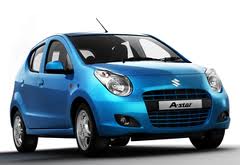 Keeping this in view, the company launched the upgraded version of this little hatchback with the features of automatic transmission which will be a boon for the people of India. Now, the existing version is incorporated with the four speed automatic gearbox, which is fitted with KB10 engine. However the pleasure of driving will be maintained using this automatic transmission. Automatic A-star will offer the mileage of 17kmpl according to The Automotive Research Association Of India ratings.

The cost of this automatic transmitted A-star is around Rs.4.35 lakhs. Apart from KB10 engine, it has many other features including power windows, CD/MP3 player as well as the automatically adjustable seat for varying the height.

Finally one will be left with peace of mind while driving the automated little hatchback in the congested roads of India.