The doping scandals ahead of Common wealth games had made lot of Indians to loose their hopes in the wrestling. But, the title of World Championship in Wrestling boosted the fans.

Olympic bronze medal winner Sushil kumar, had won the title during the world Championship held at Moscow. He is the first champion from India to win FILA 2010 World Wrestling Championship. 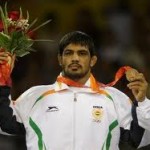 Now, the wrestler is targeting to defend himself in the upcoming events like Commonwealth Games and the Asian Games. With this event, hope of Indians in common wealth games rose.