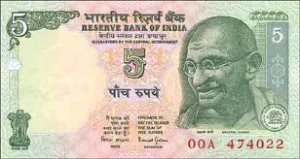 If you have a Rs.5 note, this would not be accepted by any one. Believe it, it is a fact. This is because of mischief mongers spread that Rs.5 note was withdrawn from circulation.

Some of the pretty traders, vendors, bus conductors, auto drivers are refusing to accept the Rs.5 note from the common people. The people themselves imposed a ban on the Rs.5 note.

Most of the people in the districts are in a misconception that the Rs.5 note had been vanished and had been withdrawn from the circulation.

But recently, Reserve Bank of India(RBI) has announced that Rs.5 banknotes which are issued by RBI are legal and are not yet banned from circulation.

6 comments for “No Ban On 5 Rupees Denomination: RBI”