Hyderabad, once a respectable team in Ranji Trophy championship, today became worst team of all times. However this was expected as the Hyderbad cricket teams performance was dubious for the past few years. Last season it got down graded to plate from the elite division. This year it totally collapsed to the lowest total in the history of Ranji Trophy. In a worst effort ever in Ranji cricket, Hyderabad team’s wickets fell like a pack of cards in the first innings of their league match against Rajasthan. Here are some bitter statistics of its first innings for the city cricket lovers.


Whatever is the reason, whether it is faulty selection, lack of skill in players, low morale in the team, poor coaching or local politics in the junior level, this performance clearly shows that many things are dramatically wrong with Hyderabad cricket.

On the other hand it said that cricket players are getting good remuneration along with royal treatment unlike our friends in other sports. Ranji player in the playing XI gets Rs.32,000 per day, reserve player gets Rs.20,000 plus three star accommodation and flight travel and a coach gets Rs.12 lakh per season plus allowances (source: Indian express). Is this kind of performance justified? 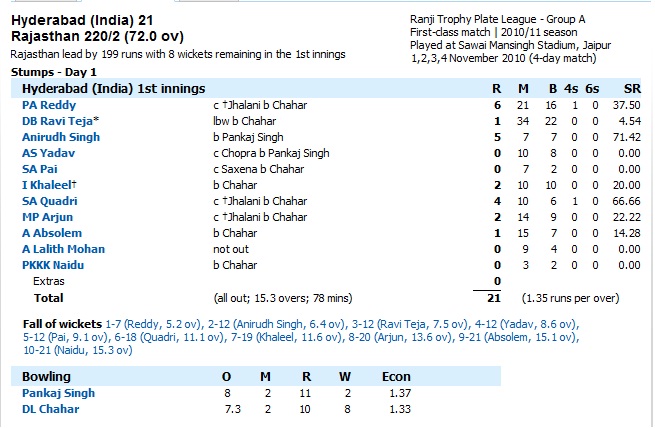 *Photograph of PKKK Naidu will be updated shortly.

*Photographs of other office bearers/coaches will be updated shortly.