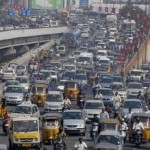 The traffic cops have warned that this particular situation may lead to increased traffic chaos, as the increase in number of vehicles is not in direct proportion with the increase in road area. Hence, keeping in mind this situation, the traffic department had approached the chief minister with a 100 day action plan, with a budget of Rs.25 crore, for improvement of traffic facilities in Hyderabad. The State government had showed positive response to the plan and had already released Rs.10 crore, for improvement of traffic signaling.