From Golconda kings to the Nizams, the city currently being called as Old city was been designed and used as the capital for administrative purposes. The emphasis was more put on palaces, gardens, worship places, bazaars, etc. which were important for the King and the people serving him, to live and perform their duties well. Though they served their purpose well before the liberation of Hyderabad, today they are no more than tourism spots.

However, we can’t imagine Hyderabad to have become so successful and popular just because of being a tourism place. Today, there are many PSUs, IT/ITES companies and of course so many facilities – both entertainment and living wise, not because Hyderabad is one of the tourist places of South India, but because of its cosmopolitan nature that made it easy for people across all over the nation as well as all over the world to migrate, mingle and work with the people here. It made the globalization in Hyderabad easy. And without Western influence, this wouldn’t have been possible.

Both British as well as French have equal importance in setting up many institutions that became the root of solid Western education system in Hyderabad, back since 17th century itself. This also helped in expanding the city with Western culture in northern side of the Musi river.


The Nizam, during various times, had both French and British as part of his army, but maintained in separate locations outside his main city. Only the money required for maintaining the army was provided by the Nizam. The places assigned were almost inhabited by the people of the Hyderabad, who were, by that time, living either very far from the capital city or very inside it. Thus, both the armies have built the area – from the scratch – all by themselves.

Since the foreign army were not forced to build their cantonment areas resembling native cities – they built them as a city of their own respective country. Thus, the cantonment areas had all facilities that a cantonment city of a French or British nation used to have. These facilities included prominent institutions, industries, schools, etc. that made their culture to prevail even after decades of their leaving the city.

The French were the earliest of the two, to have resided in the city along with their army. The most noted officers of the French was Monsieur Raymond, also called Musa Ram by the natives. He was the then French General, in the service of Nawab Mir Nizam Ali Khan, the 2nd Nizam of Hyderabad. It was him who set up a place, around which many major institutions of the city prevail even today. The place was Gunfoundry, a factory that manufactures cannon and cannonballs – a modern institution set up in 17th century of the Hyderabad city.

Raymond soon established a great credibility and stature for himself among Nizam and his subjects. His distinction, temper, talent and character marked with a rare spirit of sainthood made him so much beloved of the Nizam and his subjects, that the British envied it. His cannon factory used to manufacture world class guns and cannons, as per historians.

All this effort had paid off well, as the area became the anchor for many modern institutes, and thus the people here got access to western culture, living, thinking, etc. which helped the city very much during globalization.

The Gunfoundry was set up around in 1786. However, in 1798 Raymond’s death resulted in disarmament of the French by the British who overtook the area.

The oldest church of the city, St. George’s church, was built by these British in 1844 AD in the same area. This structure later became a Boy’s school and the church expanded into a beautiful monument in same area. 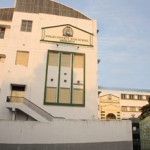 Then set up was the St. Joseph’s Cathedral which completed building in 1872 AD in same locality beside All Saint’s. Then Rosary Convent was set up in 1904 beside this church. There is also another girls’ school adjacent to the St. Joseph’s Cathedral, Hyderabad, also run by the Franciscan Missionary Sisters of Mary named St. Joseph’s High School, which has a Telugu medium of instruction, where admission is offered for very little or no fees to the poor. 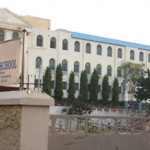 Its remarkable to see that all these institutes were established particularly around Gunfoundry area.

All these institutes resulted in inculcating scientific thought, mindsets in people of Hyderabad. The republican nature of the French has probably resulted in weak feudalism and castism in Hyderabad compared to other parts of Telangana area.

When Nizam wanted to start a bank, he chose the same locality rather than some other part of the city. Today the same bank has become the headquarters of the State Bank of Hyderabad, the largest associate bank of the SBI. 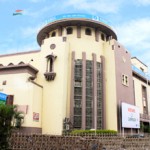 The area Abids, nearby, has become a major business center and was the biggest retail revenue generator in entire AP, until Punjagutta took over its place recently and pushed into second position.

Though Gunfoundry is in ruins today because cannons and cannon balls are not relevant these days, it was the reason for establishing an area and culture that made Hyderabad match with the ideals of the modern civilization in Global village culture.

We can also notice that monuments and structures are not required to build a city culture that is positive and enduring. Apart from this Gunfoundry area and Secunderabad, which used to be the British cantonment area, there are no such great institutions in other parts of Hyderabad city including Banjara hills, Jubilee hills or the Hi-tech city or the Old city that encourage cosmopolitan culture, quality education, republican and non-feudalistic outlook.


Sure Old city has historical edifices and The Hills/Cyberabad have modern edifices. But the ability to educate (transform) person from inside has happened only in Gunfoundry and Secunderabad areas. The rest of the city represents tribal, feudal or blue collar outlook.

Anybody who has lived abroad and came back to Cyberabad will vouch that it represents Hollywood/fancy-land rather than a main street of America or Europe.

The supporting institutions that got set up as the by-products of the Gunfoundry have stayed relevant and survived even 225 years later. More importantly, they have established the common ground so that Hyderabad could be part of the Global world.

You may also like to read:
Liberation of Hyderabad State – a Medieval State Merged into a Modern Nation