The recent ad war between print media giants, Hindu and Times of India was little contrary to the routine frenzy ad wars. Unusually, this war for readership proved to be more educational for the readers, than being an entertaining skit.

While the Times of India launched its ‘Wake Up!’ campaign, provoking the readers (mainly targeted at Chennai readers) to shift from the newspaper that puts them to sleep with its boring and dreary news (indirectly pointing out at the Hindu), Hindu had hit back with the tag line ‘Stay Ahead of the Times’ – telling the readers to move out of the Bollywood and page 3 gossips and take up the news that is relevant to current affairs of the country and the world.

There were a series of television commercials and print media ads that went through the competition between Hindu and TOI. In its very first Chennai specific ad, TOI has sent a message ‘Wake Up to Times of India’ through its TV commercial in which a Tamil lullaby plays in background, while the readers are seen sleeping in various positions (standing, sitting, leaning) with a newspaper in hand, the whole concept in the ad indirectly pointing to Hindu. It is then when the Hindu reverted back with a series of advertisements using the tag line ‘Stay Ahead of the Times’ which was targeted at audiences all across the country and not only Chennaites.

Some of the series of print media ads launched by Hindu, after TOI came up with its TV ad are:

The print ads given by TOI are: 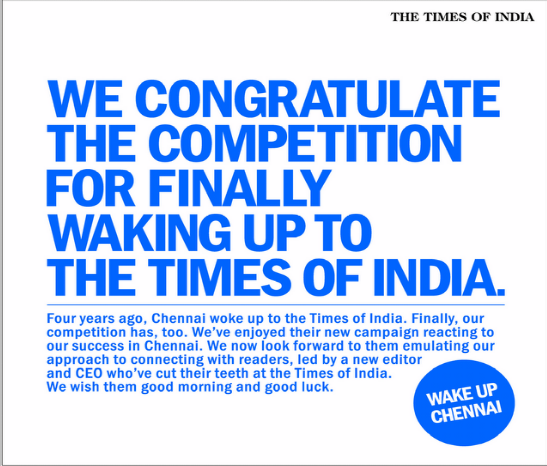 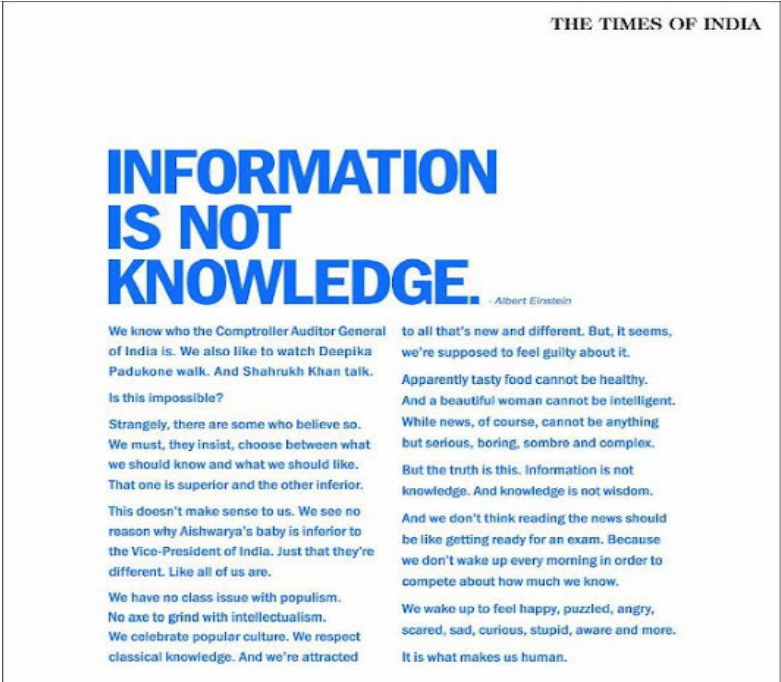 The Hindu also retaliated through a series of TV commercials in the form of ‘vox pops’, which is an interview format ad, getting answers from general public. In one of its commercial, a bunch of youngsters were asked few questions related to general knowledge – what is the expansion of UPA? Who is our vice president? to which the people were clueless and gave wrong or funny answers. But when the same people were asked about trivial questions such as, whether Aishwarya Rai’s baby is a boy or a girl? What is the nick name of Hrithik Roshan, the answers were direct and correct. And finally the ad ends up with the question what newspaper you read? For which the answers were beeped out, with their lip reading indicating ‘Times of India’. These ads were a direct dig at TOI.

The ad gurus terming this ad war as substantive journalism Vs. pulp fiction, agree that the Chennai-based publication’s cheek-in-tongue stance had proved to be hit and more substantial than TOI’s campaign, as the Hindu ads raised two thoughtful questions – if the information given out by media qualifies as news and if the media is cautious as what it is putting it out as news.

While Hindu justifies its ad campaign as purely a call to action campaign for the youth, so as to provoke them to take more informed choices regarding the media, TOI justifies its ad by saying that ‘information is not knowledge’ and it sees no wrong in giving news about popular cultures and sensational events.

Whatever may be punches or counter-punches of the brands, it is up to the readers to educate themselves about the factual and functional information of the country rather than just concentrating on junk or useless information.