The authorities finished off the work, thanks to the judicial directive that prompted the work. The traffic was, however, not allowed. 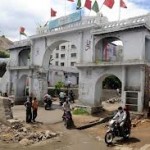 The State Archaeological Department spent close to Rs 12 lakh for the task. The vibrations caused by traffic are said to cause damage to the construction work. The R & B Department erected two short walls across the Kaman to prevent traffic. The renovation work caused difficulties for commuters for three years.

Even after completion of the work the road was not opened. Consequently, people moved the court and following an order thereof, the authorities took steps to prevent damage to the Kaman, for which Rs 2 lakh is said to have been spent.

Finally, walls were dismantled and traffic was allowed. Locals are requesting for permitting buses and ambulances by removing the iron structure.