The pollution in Hyderabad city is invariably on a high. According to the Andhra Pradesh Pollution Control Board (APPCB), this year Hyderabad is the most air polluted city of the state, when compared to other cities of the state.

The APPCB had conducted an ambient air quality monitoring systems at 22 locations and based on the reports, the APPCB has come to this conclusion. Out of the 22 monitored locations, 19 locations had a very high level of Respirable Suspended Particulate Matter (RSPM), which is very dangerous. 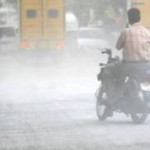 The government is not taking any action plan, to keep a check on air pollution. It had made Pollution Utility Certificate mandatory, but no measures have been taken to monitor day to day things.