I am from a city and never really lived in a village except for a few days on a vacation at my cousin’s village. When I compared my cousin’s life in village with my life in city, I was really surprised by the kind of pampering he is getting from our government.

My cousin, the so called ‘poor farmer’, is enjoying a lot of benefits from the government. Let me clarify you one thing upfront, I don’t have any personal enmity with my cousin. But I am really surprised to see the benefits he is getting and more importantly, he still is not happy and often complaining on government.

I wondered why government is so kind to my farmer cousin. I realized that after independence, agriculture was identified as a pre-dominant sector that can help boost the economy of our country. Also since there was a scarcity of food grains in the country, the then Prime Minister of India gave the slogan Jai Jawan Jai Kisaan to cheer farmers to increase their productivity.

Government is providing too many subsidies to farmers today
Government initiated various schemes of subsidies to help them. It started with the subsidies on purchase of various agriculture inputs like high yielding varieties of seeds, fertilizers and farm mechanization. Till here I have no issues. A welfare state needs to take care of its people. I really have real issues with the following:


In addition, government spends thousands of crores tax money to provide irrigation for farmers, even though they cannot collect even one paisa as tax from them in agricultural income. Though thousands of crores are spent on the dam construction, irrigation water charges are a pittance while my property taxes and water taxes are ridiculously high.

If I buy rice in a supermarket, I pay 5% VAT. When my farmer cousin buys the same in his village, he pays 0% tax. I don’t know if I am on earth or in hell; since, as a city dweller I need to pay higher taxes to fund the farmers.

Other benefits of being a farmer
Almost all the investment and maintenance expenses required to do farming are either coming free or at subsidised prices to my farmer cousin. Even the other things like vegetables, fruits, groceries, etc., are available at cheaper prices or no cost compared to city. Plus, unlike in the city, he can literally live under a tree in a village. The land is cheap and there are a lot of trees that you can cut to build a roof on top. In the city, even maids and city labour force pay high rents to stay in a slum. By and large, farmers are leading a comfortable life, unlike what we think since their out of pocket costs are so little.

Tax free income is really a boom to the farmers. If we take the case in cities, for almost everything we pay taxes. We pay tax on the food, water, services, income, property (whether or not we are earning income from it) and so on. 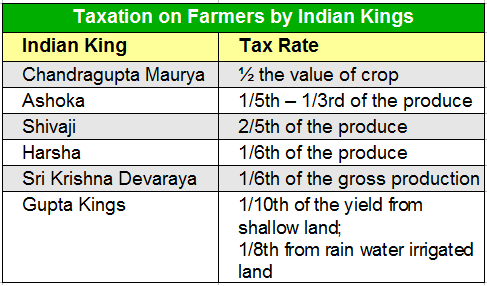 Flashback – Farmers used to pay huge taxes in the past
The scenario was totally different if we see the history of Indian civilisation, when kings used to rule. For thousands of years of Indian civilization, the farmer always paid taxes to the kings. Tax collected from the farmers was the major revenue for the government. Later till 1947, the British taxed agriculture. It is clearly portrayed in the famous Bollywood movie, ‘Lagaan’. The poor farmers agree to a cricket match in order to ask for a waiver of agricultural tax for a few years because they did not pay taxes when there was a prolonged drought. At many places, if taxes were not paid, the land would be confiscated by the king.

Since Indian civilization was based on an agricultural economy, you can safely say that many of the Indian wonders were funded by the farmers. Kings collected taxes and built roads, palaces, dams, monasteries and temples. Recently enormous wealth was discovered in Sri Anantha Padmanabha temple – all this came from the taxes paid by the farmers. Even the great kings of India like Ashoka, Chandra Gupta, Shivaji, Harsha, Raja Raja Chola, Pulakeshan and closer home the Kakatiyas and the Sri Krishnadeva Raya collected taxes from farmers.

Are today’s farmers becoming lazy?
Today’s farmers are neither paying tax nor are they afraid of land confiscation – nobody to seize their land if they don’t pay tax. Even if there is any loss (due to unseasonal rains or drought), government is there to take care of them. This may be the reason they are not productive – remember, farming is the backbone of India and we are farming for centuries.

Even after having all these benefits, how come todays farmers keep complaining about everything? I pay so many taxes as a city dweller. If I own urban property, GHMC even charges notional rent of 3 months even if property is not rented. How come my farmer cousin keeps complaining while I am bearing the brunt of all the taxes?

Is this farmer the same farmer who helped build the great civilizations of Indian past or is he an inferior version who is lazy and sucking blood of the city people like a leech?

As I mentioned, I am not aware much about farming. Is my logic correct or am I missing something? Please use the section below to let me know.