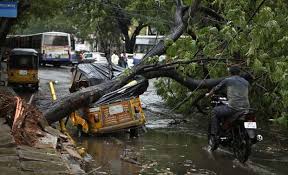 A spell of heavy rain in Hyderabad city brought respite from the scorching summer heat.

With the sudden rain and strong winds that lashed many areas in Hyderabad resulted in uprooting of more than 35 trees, damaging many vehicles and a number of hoardings fell down due to which there was heavy traffic jam in the city.

It is learnt that the city received 4.8 mm rainfall yesterday. The heavy winds blew at a speed of 100 km per hour.

There was no power supply for long hours in Himayathnagar, Basheerbagh and adjacent areas because an electric transformer exploded.

Traffic came to a halt at Nampally, Basheerbagh, Punjagutta, Ameerpet, Begumpet, Khairatabad, Raj Bhavan Road, Lakdikapul and many other areas.

According to the met department, heavy rains were due to a low pressure that was building up in the Bay of Bengal.