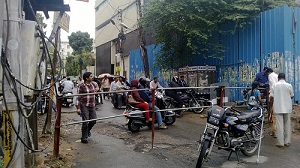 In the zeal to ensure the ‘Chalo Assembly’ is a failure, administrators and police have destroyed the economy in Hyderabad’s central business district. The scale of precaution clearly indicates there is a lot of support for the cause.

Overzealousness of the administrators
Barricades were kept on all roads leading to Assembly many kilometres before. There is no need to barricade so heavily at street and sub-street level causing inconvenience to office goers. Protests happen everywhere in the world. There should be some kind of mechanism, some kind of via media to protest in democracy – not clamp down the entire city to prevent one section from protesting.

Barricades were kept as if it is for Ganesh procession – without people! Only people out there were those going to offices, hospitals, and those going to do calculations to pay advance tax to government.

Commitment of some employees
Committed employees had to walk kilometres to reach office. Those with two-wheelers faced even more problems. They had to go all round the city to report to work. Food shops were closed. Companies had difficult time arranging food for staff. 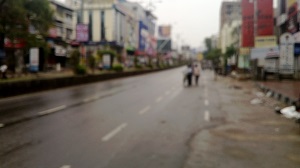 Empty road due to bandh

Affecting ITES small businesses
You can’t put barricades and stop business like this; it’s affecting the businesses badly, particularly ITES industry. Small and medium ITES companies have to be open to support international clients. They have to execute on their projects, employees have to come. Salaries need to be paid. It is a loss of pay for employees and revenue loss for businesses. Small business owners were seen fuming. Will government reimburse this? Will government pay for the project pending penalty?

Already bomb blasts are affecting businesses regularly. Government is not able to protect from regular bomb blasts. Two times bomb blasts happened. The culprits are not yet bought to the book. Now this is new thing.

Lot of small businesses that do offshoring are present in the city centre. Every now and then they cannot close. It’s becoming an everyday challenge for small businesses. Government should be pro-business. It has to figure out a way to ensure there is no disturbance to businesses that want to run, while allowing disgruntled people to protest at some location.