The one thing that can change the face of our country is ‘Education’. Education here we talk about is the schooling system that focuses on developing good citizens, not on academics. Education moulds youngsters to usher in a new society – breaking down certain mind-sets and superstitions. More than on math, science or social studies, education focuses on nation building.

India being a welfare state (a state that takes care of economic and social well-being of its citizens) is not giving enough priority or attention to the most crucial aspect, the education. Here, we compared education system in India, with a purely capitalistic country, the United States of America.

Government’s primary focus:
In US, government involves only in a few key elements that are really essential. Their focus in more on four main things – national security, maintenance of roads, ensuring fair systems using limited government departments and ‘education’.

Contrary to this, government in India involves in almost all the sectors. More than 250 public sector units (PSUs) represent our government’s active involvement in many industrial and service sectors. Aviation, 5 star hotels, petroleum and natural gas, pharmaceuticals &fertilizers, steel, coal, railways, atomic energy and banking – they are in almost every field. But the main sector which it needs to focus is education is often neglected.

India offers free schooling with below par standards:
Coming to India, ‘Right to Education Act’ in India which mandates free and compulsory education for every child between the age of 6 and 14, was adopted of late in the country in 2010, while all the developed countries adopted a century ago. 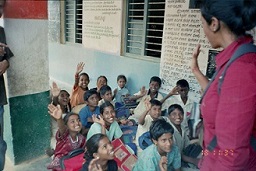 Good that we adopted it but how about the execution. Everyone knows the quality of government schools in India. Only blue-collar workers or below poverty line people can send their kids to such schools which are with poor infrastructure, below par facilities, poor quality teachers. In many parts of India all it takes is a room, a board to set up a school or sometimes just some land and trees.

The developed countries with the same RTE act impose huge fines on the parents who don’t send their kids to schools and government has all the power to take children away from the parents if they are proved to be unfit to have the children educated properly. But here in India, government tries to attract people by introducing free food schemes, not by providing good education.

Not only America, all the developed countries on an average spend more than 7% of GDP on education, while in India it is as low as 3.3%. Though government has plans to progressively increase expenditure on education to around 6% of GDP, not much progress has been seen in these lines.

Academic system in US follows an effective model:
Academic system in US is designed in such a way that every kid passes out of high school easily. Around 90% of kids finish their high school in US. The design itself enables basic education to every kid not high scholastic standards; it is made easy so that it will not hurt/reduce the self-esteem of any kid. This system enables kids to focus more on developing soft skills, rather than concentrating on marks and exams.

Academic system in India is designed for privileged:
Contrary to US, Indian academic system follows one size fits all approach. Only people with high aptitudes can get good grades. Most underprivileged with limited abilities cannot clear the exams. In a 2010 study it was found that, of the 2.7 crore children who joined Class I in 1993, only 1 crore reached Class X. Though private institutions are encashing the neglect of education by government, underprivileged cannot afford private school education. Ultimately, our system itself is driving the people away from education.

It’s a sad situation that while the country claims on the preamble to be a socialist country – it does not have a schooling system that can focus on developing the mind-set of its future citizens. Therefore allowing misguided sections of society to brainwash their kids and never allowing the ideas of the constitution to take proper shape. Once a child develops prejudices of caste and religion and they are deeply formed, there is no scope of changing the person’s mind-set in adulthood.