India is the world’s largest democracy and media forms an important pillar of the democracy. Media is acclaimed as the fourth estate after judiciary, parliament and bureaucracy. Indian media in the past has been recognized as being sensitive, patriotic, and an influential tool in the socio-political sphere since the days of freedom movement.

“I believe in equality for everyone, except reporters and photographers.” – Mahatma Gandhi

But unfortunately, a cancer in the form of paid news has been growing rapidly in the recent years. The phenomenon of ‘paid news’ in Indian media is becoming a threat to Indian democracy. The menace of ‘paid news’ is destroying journalism standards and respect for media companies and the profession.

Today, it goes beyond the corruption of journalists and media owners, the practice of accepting money from corporate entities, governments, organizations or individuals to run favourable news about politicians, companies and celebrities has become very common in the Indian media, due to which the media is losing its ethical value. It is not working in the interest of “for the people, of the people and by the people”.

‘Paid News’ Syndrome – An unethical and undesirable trend in Indian media
The media has been receiving private treaties involving share transfers between media companies and non-media companies in lieu of advertisement space and favourable coverage disguised as ‘news’. This is commonly referred as the ‘paid news syndrome’. 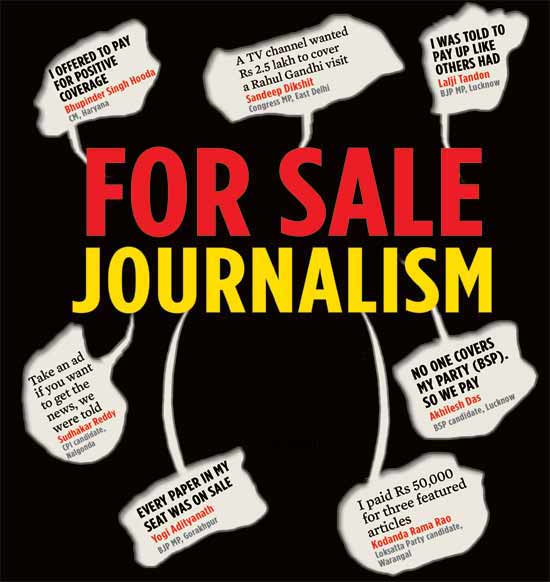 Today, India has over 82,237 registered newspapers and over 700 television channels, no other nation has as many newspapers and news channels as our nation has and the number has increased drastically during the last ten years. The numbers are increasing day by day, but they are lacking the quality. 90% of media coverage is related to entertainment and politics and only 10% to educate and enlighten people.

Corruption in Indian Media
Standard of media in our country is falling, paid news terribly deviates the media from its aims and objectives. It is compromising on the elements of honest journalism. The politicians and the people, who give paid news, are playing with the faithfulness of the people on media; it sabotages democracy and creates integrity risk to the nation. The impact of this malpractice undermines democracy.

Now, ‘paid news’ syndrome has crept into the entire mainstream of Indian media. Media, that need to be an eye opener and mirror to the society are being deviated which is an unfair practice in a democratic country like India.

Many believe that paid news has taken deep roots. Today, more and more people are losing respect for the media. They are subscribing to multiple newspapers and switch of TV channels because they do not trust media.