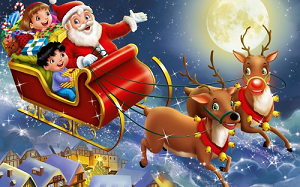 Come Christmas, one thing that makes kids excited is the chubby, joyous, white bearded man, dressed in red, and comes with a sackful of gifts… Santa Claus. Though it is said that Santa is a mythical, the belief that he brings gifts to the homes of the good children on December 24th, the night before Christmas is still prevailing.

Santa Claus fills the spirit of Christmas in the kids. It is believed that he comes secretly and leaves the gifts for the kids usually in the night time. He present the children with gifts that are exactly deserved by them.

Gifts to ‘Nice’ and ‘Naughty’ kids
It is believed that Santa makes a list of children across the world and categorizes them as per their behavior in to ‘naughty’ and ‘nice’. For well-behaved, nice kids he presents toys, candies, dolls, etc., and to naughty kids he delivers coal. It is also said that he makes all the gifts with the help of elves in the workshop and using his reindeer sleigh he distributes them.

Believing in Santa
Many people know Santa is a mythical figure but believing in Santa signifies the hope – the importance of having a dream. You believe in Santa implies you believe that the world has infinite possibilities, so anything you desire can become true.

Santa Claus himself represents the spirit of family fun and the joy of giving and receiving. If kids learn this in their childhood, they will never forget them in their life.

So, this time you are going to celebrate the Christmas along with Santa remember these points. These are not only for single day, but should be for life. Having good behavior always makes happy to you and people around.

Did you know Santa Claus…?