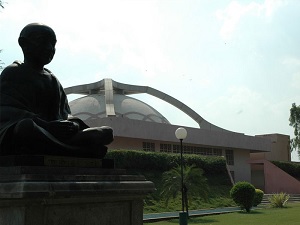 You might be aware of Raj Ghat, the place where Mahatma Gandhi was cremated in Delhi. We have a similar memorial here at Langar House – Bapu Ghat. However, very few people know about it as it makes into news only on 2nd October and 30th January.

Bapu Ghat is a memorial building where Gandhiji’s ashes were immersed at the confluence of rivers Musi and Esi (a tributary of Musi) on 12th February 1948. The memorial building was constructed by L&T in a record time of 100 days at a cost of Rs 2.5 crore. 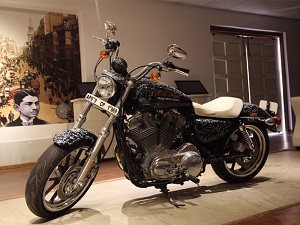 The building consists of a prayer hall, a library and an interactive museum called Peace Truth Ahimsa museum. The notable thing to see here is the 76 feet long collage wall (considered to be the largest in the world) featuring more than 400 pictures of Gandhiji.

You also get to see a Harley Davidson Motorbike that is on display. It is called the Ahimsa Harley which has signatures of 900 students from 26 countries as a symbol to announce that Gandhiji has arrived in this 21st century.