India officially became a republic in 1950. On 26th January, 1950, the Constitution of India has come into force replacing the Government of India Act (passed by British in 1935) as the governing document of India. We celebrate Republic day on 26th January every year on remembrance of that.

What does republic mean?
India’s official name is Republic of India. Being ‘republic’ not just means having a separate constitution and not just that power is held by representatives elected by the people. It also means power is non-hereditary (opposite to hereditary monarchy). Power has to be in right hands in order for the country to do well. Sadly in India, hereditary politics is still thriving, even today. 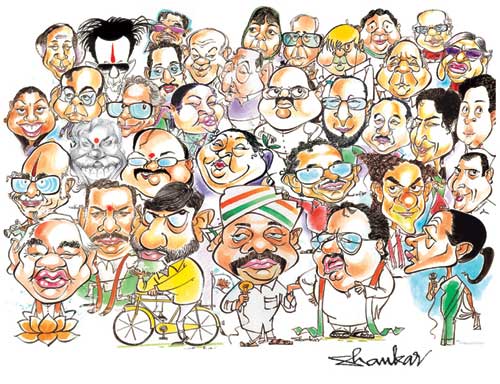 From Abdullahs in Jammu and Kashmir to Karunanidhis in Tamilnadu, the hereditary politics is rampant in India. Many critics say Nehru-Gandhi family has been a model for most politicians in India. The selfish motives of leaders, who don’t want to let power and authority go to some others, made India a hereditary democracy than a people’s democracy.

Some examples of families who are involved in this hereditary democracy are:

People are electing the leaders but sadly, the people who are contesting are the heirs of existing leaders. Opportunities are often given to those whose fathers are in power and not to those who have competence.

Even today, almost nine out of every ten Congress MPs (aged under 40 years) have a hereditary seat. Compared to other parties, Congress has 3.5 times as many hyper-hereditary (people with many family connections) MPs.


Every MP under 30 in India has inherited a seat: study
A British writer and historian, Patrick French, studied this and mentioned in his book India: A Portrait. It revealed some startling facts about the hereditary politics in India. According to his research:

“India may go back to hereditary monarchy” – Patrick French
Expressing great disappointment over the issue Patrick French concluded saying, “If the trend continued, it was possible that most members of the Indian Parliament would be there by heredity alone, and the nation would be back to where it had started before the freedom struggle, with rule by a hereditary monarch and assorted Indian princelings. The next Lok Sabha will be a “house of dynasts”.


Barack Obama, the first black President of America, is not from a privileged or political background. Born to an American mother and Kenyan father, Obama didn’t have a privileged childhood. His father abandoned the family, he stayed away from his mother, and he struggled to reconcile the social perceptions of his multi-racial heritage. Despite all these, he has become one of the influential Presidents in the history of United States.

Same is with Margaret Thatcher, the longest-serving and the first woman Prime Minister of Britain. Her father owned a grocery shop and she had no connection with politics.

If we take a look at Great Indian kings like Chandragupta Maurya and Krishnadevarya, they were not Crown Princes. Chandragupta with his chief advisor Chanakya passed a series of major economic and political reforms and strived hard for welfare state, while Krishnadevaraya has a strong conviction to serve the country.

Competence matters, not inheritance
Though the kin of politicians do have some exposure since their childhood, passing power as hereditary doesn’t make much sense. Would you accept if only an IAS officer’s kid becomes next IAS and only a doctor’s kid becomes a doctor even if they have competence? Sadly, nobody questions about inheritance at the highest level of leadership.

For a developing country like India, there is an immense need for good leaders. But due to this power inheritance many competent individuals are not getting a chance to serve the country. Who will lead the nation should not be based on who they are born to but based on what they are capable of.

← Movie, Movie Every Where, Not a Single Award for Tollywood
Minimum Auto Rickshaw Fares Hiked →