The RBI is going to remove from circulation currency notes issued before 2005. This will also apply in case of Rs 500 and Rs 1000 notes. 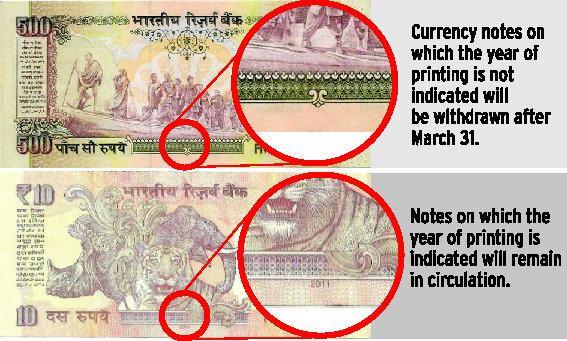 The RBI has advised people not to panic. It has clarified that public can exchange the old notes for new ones. They have to approach scheduled commercial banks for this. It is easy to identify the old notes because notes issued before 2005 do not show the year of printing.

From the beginning of July ’14, when exchanging the old notes for new ones, public have to submit proof of identity and address to the branch of the bank. This rule will apply if the public making the exchange are not customers of the bank, and the number of notes exchanged is more than 10 in 500 or 1,000 rupee denomination.

The RBI has already started withdrawing these notes from the public through the traditional method of banks. According to the bank, even after 1 July 2014 the pre-2005 notes will work as a legal tender, and public can exchange any number of these old series notes from the bank branches where they have their accounts.

The objectives of this measure is to encourage cards and bank-based transactions, discourage cash transactions and eliminate fake notes and notes issued before 2005 because these notes have fewer security features.