Hyderabad is all set for grand celebrations of Ganesh Chaturthi as usual. You all might be very busy preparing for the festival, participating in setting mandapams, doing arrangements and all. Have you purchased the Ganesh idol? If not, it’s time for you to show that you really care for the environment and you contribute to a safer environment by purchasing clay idols, which are not only eco-friendly, but traditionally it is the right way to do it.

Clay was used traditionally for making the idol
Earlier, Ganesh idols were made up of natural elements like mud, clay (banka matti) and grass husk. The idol was then adorned with natural and organic colours like turmeric. But now-a-days idols of non-biodegradable material’s like POP (Plaster of Paris), Thermocol and Plastic are made, which result in environmental pollution. 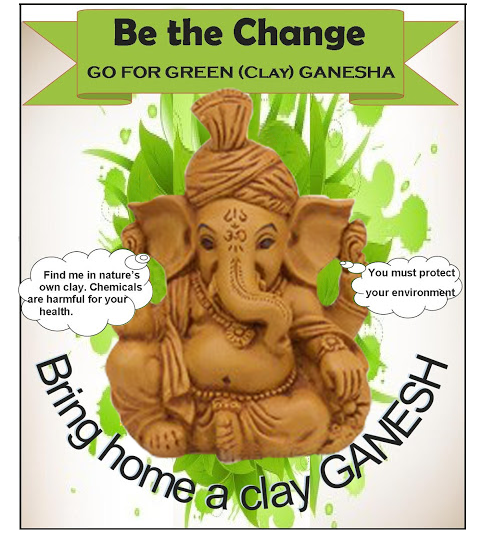 Ganesh idols made of synthetic colours and PoP are harmful
The demand for bigger and more Ganesha’s has been growing these days. Initially it was the faith that made people to set up mandapams for Ganesha. Now it has become a symbol of status and competition. This has made the market commercial for Ganesh idols. Sculptors make idols made up of Plaster of Paris because it is cheap, lighter and easy to mould.

Agreed, that idols made of PoP (Plaster of Paris) are cheap and lighter, and they look beautiful when decorated with synthetic metallic colours. But, the point of concern here is, POP does not dissolve easily in water and the idols float on water after immersion. The colours that are used contain harmful metals like cadmium and mercury. Cadmium is a dangerous metal. It can affect your lungs, kidneys leading to renal failure and can demineralize your bones leading to weak bones. Mercury is no less dangerous either. It can cause several harmful skin diseases and has adverse effect on mental health. They cause water pollution and are dangerous for human life.


Clay Ganesh idols are not only eco-friendly but also more traditional
Using Ganesh idols made up of clay and mud for pooja is traditional. It adds spiritual and devotional value to our pooja and offerings. You can use smaller idols, and it doesn’t matter as long as our devotion is big and our faith is great. God will not appreciate polluting the mother nature in his name either. Preferably, going for a traditional clay Ganesha is what Lord Ganesha wants all of us to do. And let us adorn him with natural and organic colours.

We should immerse only the clay idols in water and not the idols made of hazardous materials like POP and other harmful chemicals. Clay idols have the following importance:

Clay idols symbolizes the spirituality and simplicity of Indian culture. Ganesha Chaturthi is a festival of wisdom, prosperity and auspiciousness. Let us maintain the auspiciousness of this festival by saying no to POP. You can also perform a symbolic immersion by taking a bucket of water and immersing the clay Ganesh idol into it and then you can use it to water plants. Therefore this Ganesha Chaturthi lets bring an eco-friendly clay idol and celebrate it by keeping the environment in mind.