The History of Hyderabad is longstanding for 400 years. Nevertheless, there is a temple in Hyderabad, which has a history of more than 850 years. The name ‘Hyderabad’ reminds you of the historical Golconda fort, Hussain Sagar, Tank bund and also not even 2 decades old Hi-TEC city. But, many people and tourists are unaware of the fact that Hyderabad also has one of the oldest temples in India – the Karmanghat Temple. 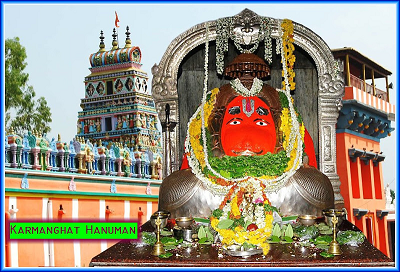 “Dhyana Anjaneya Swamy” temple of Karmanghat is the oldest temple in the Hyderabad, which has a deep-rooted history of more than 850 years. It is an east facing temple, while many temples in general are north facing. It has a great history associated with it. However, this temple has not been talked about much or brought to limelight anytime, which is a very surprising fact!

History of Karmanghat temple
This temple is built by Prataprudra II, a king of Kakatiya dynasty. One story behind the construction of this temple is that – King Pratarudra II was on a hunting expedition; and after hunting for long, he was tired and rested at a village called Lakshmigudem. When he sat under a tree, he repeatedly heard the roar of a tiger; but, he couldn’t find the tiger anywhere around. He proceeded in the direction of the roar, and after following it for some time, he heard the chanting – “Sri Ram” – and discovered the idol of Lord Hanuman. That night, in his dream Lord Hanuman asked him to build a temple at that place. On the very next day, the king laid the foundation for the temple (approximately in 1143 A.D.) and he directed the completion of the temple construction at a faster pace.

How the temple got the name of “Karmanghat”?
Way back in 1679, the Mughal Emperor Aurangzeb had passed an official order of demolishing Hindu temples. He demolished many Hindu temples in India, including most sacred Kashi Vishwananth Temple, Somnath Temple, Kesava Deo temple; and temples in Udaipur, Chittoor, Jodhpur, etc. (ample archeology proofs are there to make it evident that many mosques in India are built over Hindu temples). But, he got humbled and couldn’t demolish Karmanghat temple for some reason.

We are not really aware of the fact; but, there is a local belief behind the name of this temple i.e., ‘Karmanghat’ – Aurangazeb, after conquering Golconda, has sent his soldiers to destroy the Karmanghat Hanuman temple. His army tried to enter the temple. But, they were pushed out by some invisible strong force, and made them not to enter the temple. They came back to Aurangzeb and reported the same to him. Aurangazeb then decided to go in person to destroy the temple. He too experienced the same. After multiple trials to enter the temple, he heard a strange voice saying, “Hei rajan Mandir todna hai to, pehle tum karo man ghat” (Hey King, If you want to enter the temple, make your mind stronger”). He couldn’t believe what he heard and asked the voice to prove truthfulness and Lord Hanuman appeared. This is how it got the name “Karmanghat”.

Here, we are not advocating whether the story is true or fiction. But, the fact is that Aurangazeb for some reason couldn’t demolish the temple. 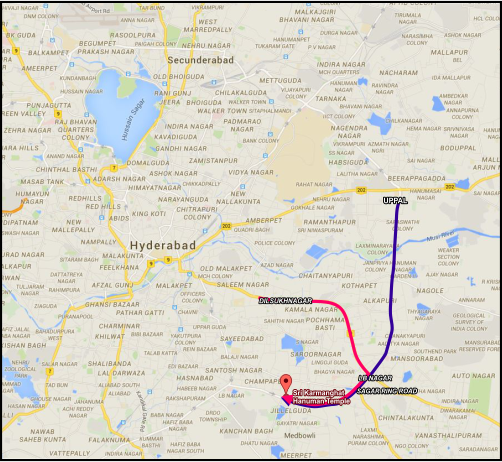 Where is Karmanghat temple in Hyderabad?
This Eight and a half centuries old Hanuman temple is located at Karmanghat village near Sagar ring road, towards Chandrayanagutta in Ranga Reddy district. It is on the ring road; and you can have comfortable long ride on the highway. It has an abundant parking facility. It is at a distance of 12 kilometers from Mahatma Gandhi Bus terminus and 24 kilometers from Secunderabad bus station.

Why late? Go and visit this weekend the more than eight centuries old and the strongest hanuman temple in Hyderabad.