Humans communicated before the development of language, and even today people are sharing their thoughts, feelings and opinions through various non-verbal means such as signs and symbols, body language, facial expression, eye contact, writing etc. However, communicating through verbal means using a spoken language is the effective way of expressing ideas and opinions. A conversation also falls into the same category of verbal expression but it requires a social skill to relate to the other person’s opinions or points of speech. Engaging in the conversation does not require any intellect and all it needs is a topic on which the people can relate each other to express their ideas. It requires instant feedback or quick response for a conversation to continue whereas communication may happen either verbally or through other means like emails, text messages, letters, phone calls etc. 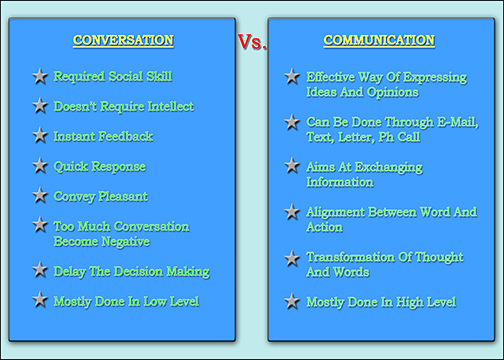 Is communication same as conversation?
In fact, communication and conversation are two different entities that often gets confused with each other. Abdul Kalam consider himself as a terrible conversationalist but a good communicator. In general, we can say most of the conversations are full of pleasantries, useless, time waste and could be devoid of any useful message but communication is a two-affair thing that aims at only exchanging information. Politicians say very convincing words to the audience making people forget what they have said yesterday and what they are going to speak tomorrow. They are effective conversationalists but not good communicators because there is no alignment between their words and actions. To have a effective communication it is important to figure out what needs to be accomplished and express your thoughts to motivate things.

Which is more effective?
Many people think that having the ability to converse is similar as being able to communicate effectively. Also, there is a misconception among people that if one speaks effectively, they can influence other persons behavior. This is entirely wrong as having a conversation without a sense of direction will only delay the decision making process resulting in wastage of time and resources. Many great conversations happen in social and literacy groups where people engage in interacting with each other to increase their proficiency, exchange knowledge and accomplish an intended consequence.

A conversation becomes effective communication only if there is a transformation of thoughts and words into meaningful actions. It focuses on what we wish to accomplish that produces “win-win” situation but not what we wish to share without formulated direction. A person may be good at communicating things but he may be bad at conversing with people to share his ideas, feelings, experiences and imaginations. To live in society it is very important to converse at least to some extent, but too much of it may become negative and prevent the person from being a good professional delivering good results at work.