We all know, this year India will be celebrating 67th Republic day on Tuesday, January 26th, 2016. It is a common practice that the preparations start one month before in New Delhi, and the full dress official rehearsal will take place few days prior to the actual event. The Republic day celebrations of 2016 are going to be even more special than the previous years because the Indian Government has planned to launch a new action plan for the ‘Start Up India, Stand Up India’ campaign which is expected to provide lot of job opportunities for Indian youth. There are more interesting topics that the Indian Government is going to emphasize this year like maintaining cleanliness in the neighborhood areas and statues of great personalities. The whole festivity is a ticketed event and those who like to visit can buy them until January 25th by spending Rs 500 for reserved seats, and Rs 100, Rs 50 and Rs 20 for unreserved seats. 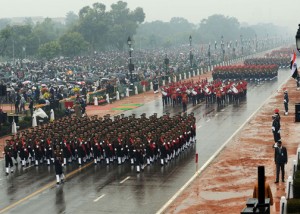 What is special about 2016 parade:

You may also like to read:
Flag Hoisting on Independence Day and Republic Day in India
Indian Flag – Do’s & Don’ts
Important Facts about Indian Republic Day
Indian Flag must be in Khadi of Cotton, Silk or Woolen material