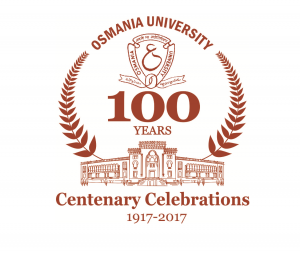 Reputed as seventh oldest institution of higher learning in all of India, Osmania University has decades of achievements since its establishment in 1918. The university catered education to students in various streams and has significantly contributed to the academic and economic development of the region. The OU university alumni includes many famous personalities from the country and abroad. With its 100th anniversary nearby, the university is making efforts to have a memorable celebrations to start from April 26th.

The event is going to take place in a grand scale where several programs will be held to commemorate the past achievements and review the scope for improvising the university. The Telangana Government is supporting the event by appointing a special committee to work on various aspects for reviving the past glory of the Osmania University. Students from all over the world who have passed out from OU are invited to take part in this historical event.

The Osmania University will celebrate 100 years of its foundation. The University is organising a year long celebrations to mark the centenary, beginning on 26 April 2017.

Chief Minister K. Chandrasekhar Rao has sanctioned Rs 200 crore for the conduct of centenary celebrations of Osmania University from April 26 to

28. The major portion of the fund would be allocated for infrastructure and about 15-20 crore would be spent for centenary celebrations.
The celebrations would not be limited to the campus alone. The celebrations will be carried on at constituent colleges which includes Nizam College, Women’s College at Kothi, Saifabad Science College and Secundrabad Arts and Science college.

Osmania University Campus
Osmania University represented a new beginning in the country’s educational system in South Central India. The University had shown great resilience and achieved many coveted milestones. It has several architecturally elegant buildings and a spectacular campus spread across an area of nearly 1600 acres (6.5 Sq.Kms.) with nearly 300,000 students(including affiliate colleges) pursuing studies and 5000 teachers and staff employed. The main campus is located in the North Eastern side of the city near Tarnaka adjacent to the inner ring road. The other neighbourhoods close by are Vidhyanagar, Ramanthapur, Warasiguda and Habsiguda. 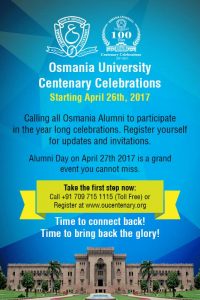 Osmania University Alumni
The University boasts upon his distinguished Alumni. The Alumni of Osmania University range from people like the former Prime Minister P.V Narasimha Rao to likes of Cricket Commentator Harsha Bhogle and Shantanu Narayen, CEO of Adobe Systems Incorporated. The University has produced eminent personalities in fields of politics and law, bureaucracy, business, science and engineering, sports and cinema.

Osmania University Alumni Registrations
Registrations are being sought by calling on this phone number: +91-7097151115. This is toll free number and is a first step towards registration. All alumni could also register at http://www.oucentenary.org/