Telangana has a history of civilization dating to 5000+ years. Telangana was called Trilinga Desam or Trilinga Pradesham in ancient times.  The translation of the term “Trilinga” reads as the land situated between the three temples dedicated to Bhagwan Shiva. These very sacred temples are located at Kaleshwaram, Srisailam and Draksharamam. There is no doubt that from thousands of years back there is reference to ‘Trilinga desam’.

Historically speaking, there is one more possible reason as to how the name “Telangana” came into being. At the time of the Nizam’s rule, the Hyderabad state extended all the way up to Aurangabad including almost third of current Maharashtra state. During this time, the Telugu areas were referred to as “Telugu Angana” unofficially. That was primarily to distinguish this region from the areas of kingdom where Marathi or Kannada was the main language of people. With the passage of time, “Telugu Angana” being a longer word may have shortened into “Telangana.”

Three Temples from which Telangana derives its name
Let us now go into details about the three holy shrines on the basis of which Telangana name was derived from Trilingadesam. There are many famous Bhagwan Shiva Temples in the Telugu areas of Telangana, Rayalaseema and Costa Andhra. 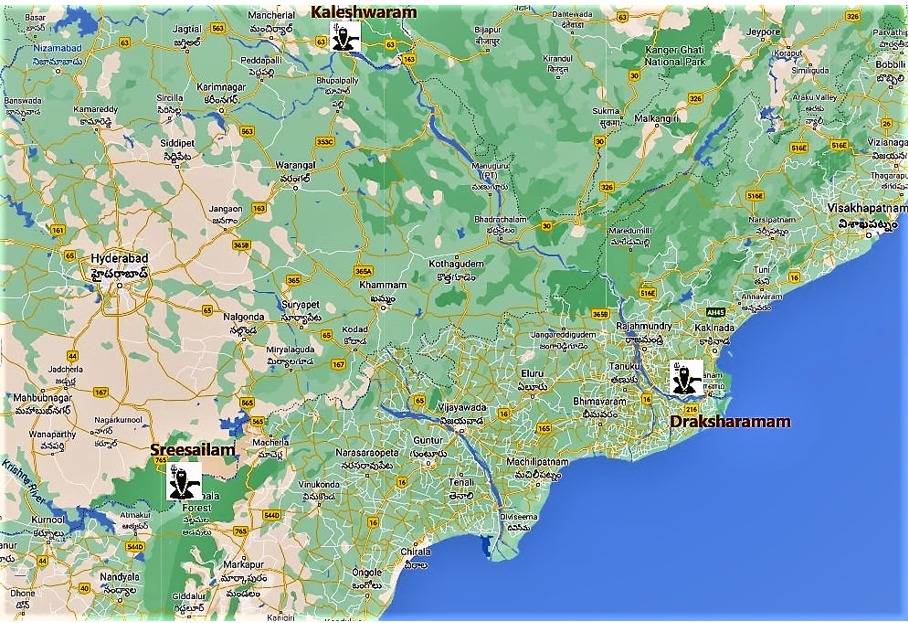 Kaleshwaram is about 260 kilometers from Hyderabad and journey time can vary from 6 to 7 hours depening on traffic. The location of Kaleshwaram is in the Mahadevpur Mandal of the Jayashankar Bhupalpally district. At Kaleshwaram there is the intersection of River Godavari and one of its tributaries, Pranahita. Kaleshwaram is very close to Maharashtra state border.

The most striking feature of this temple is that here, only one pedestal holds two lingas. The name “Kaleshwara Mukteswara” is inclusive of the names of two deities, which are worshipped in this shrine – Bhagwan Mukteswara or Shiva and Bhagwan Kaleshwar or Yama. It must also be noted that the Godavari River area settlements has many references in ancient puranas, itihasas and other texts.

This holy shrine is unique, as here we get to see the combination of both the divine forms: Jyotirlinga and Mahashakti. In Srisailam, Mahashakti is worshipped as Bhramarambika Devi. The temple walls have carvings representing the varied manifestations of the Bhagwan Shiva.

The Bhagwan Shiva temple of Srisailam, situated in the district of Kurnool just few kilometers from the current Telangana border. Srisailam is located 330 kilometers from Hyderabad and is a 7 hours drive to reach.

The entire zone of Srisailam is in the midst of dense forests that have beautiful hills, the bilva and the kadali trees. The forest area is also well – known for the Krishna river, which is seen as an underground spring here. This is called the Patalaganga. The devotees first take a holy bath in Patalganga and then proceed to have darshan of the deity in the temple.

The name of devasthanam or temple town is also Draksharamam now in East Godavari district. The temple is quite close to the towns of Kakinada and Amalapuram. This temple is 170 kilometers from current Telangana border. From Hyderabad , the temple is 9 hours by road and 470 kilometers away.

This temple is a kshetra of both Shakti Devi and Bhagwan Shiva. In the temple, the presiding deities are Bhagwan Bhimeswara Swamy and Manikyamba Devi. The Linga of Draksharamam temple is almost 3 meters tall. When the word “Draksharamam” is translated into English, it means “Home of Daksha Prajapati” who was the father- in- law of Bhagwan Shiva and father of Sati Devi.

Conclusion: Telangana named after 3 ancient Bhagwan Shiva Lingas – the Trilingas
We have referred to multiple sources to summarize the key points about the origin of Telangana in a single article. So as you can see the original name Trilinga pradesam has been modified over thousands of years. Also, over these thousands of years the geography has also been modified as regions got added or removed from various Kingdoms due to wars or other events. So starting from the Trilinga Desam it changed a bit over time to become Telangana as outlined earlier in this document.