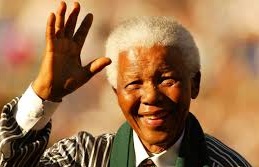 Former president of South Africa, a respected leader, Nelson Mandela died at his home in Johannesburg. He was 95. Mandela is popularly known to his countrymen as Mandiba.

Mandela led a hard struggle against racial discrimination and established democracy in South Africa. Mandela became the first democratically elected president of his country. The world deeply regrets the loss of this great leader.

You may also like to read:
Nelson Mandela – What Makes Him a Legend in Modern World
20 Year Anniversary: Nelson Mandela’s Release From Prison