Basava also known as Basavanna was born in 1134 AD to a Shaiva Brahmin couple Madarasa and Madalambike in Bijapur district, Karnataka, India.

Basava is a man ahead of his time that was against casteism and untouchability. He strongly believed in “work is worship” principle, social equality and resolving conflicts through debate and not by violence. He is well known for his ideological spiritual preaching and his progressive revolutionary thoughts towards human well-being of society in the early 12th century AD. 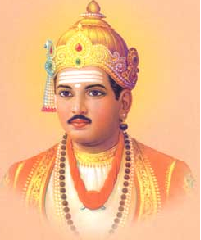 Basava’s childhood
In the early centuries, people were rigidly bound to religious traditions. Based on these traditions, rituals and conventions, people lost their sight. People forgot that there is only one God. Blind faiths and beliefs among people laid down a foundation of caste system. Basavanna left his parents at the age of 12 years and went to kudalasangama for studies.
Basava did not believe in rituals and he denied his family custom (Upanayana ceremony). This bold decision taken by him at the younger age amazed everybody.

Basava’s philosophy and teachings
Basava’s mission was the formation of a new society where all individuals are considered equal irrespective of caste, creed, profession, gender, etc. He established Anubhava Mantapa, a spiritual enlightenment center run on certain noble principles. Below are some of the major take-aways of his philosophy and teachings:

Basava introduced the concept of Ishtalinga
Basavanna explained, there is no shape and form of a God. There is only one God-real, noble and supreme in the Universe. He is always there to help the true devotees as no other God could attain dignity as Shiva whom Basavanna worshipped in the form of Linga (symbol of infinity).

He didn’t just teach but really practiced by all the members of Anubhava Mantapa in their daily life. Thus, Basava is a man who practiced what he preached in his life.