If you were a child in the early 1990s in a quieter Hyderabad, you may remember going to school in double-decker buses, with everyone racing to grab the best seats in the front of the top deck. For a kid finding that seat was priceless!

At one time Hyderabad had a decent fleet of double decker buses. These used to ply on the then busiest roads i.e. Afzalgunj to Secunderabad going through Abids, Nampally station road, Koti, Assembly, and Paradise etc. Many will remember their school days with rides on 8A and 7 numbered double decker buses. 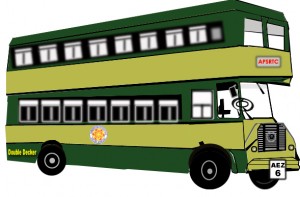 The roads are insufficient to match the continuous increase in vehicles and people. Traffic congestion is increasing every month. The fact is that in the next 20 years there will be more people in urban areas than in rural areas worldwide. We need to be ready with newer systems to be able to cope with our cities having probably 4-5 times the current populations. We need to get ready from today to have viable options at that time.

A double decker bus can accommodate 63 seats compared to 36 seats in a regular bus. In addition, it has a larger standing space for people. The best part is that it takes lesser area on the road to carry more number of people. Simply put, it is like a 2 floor building – same road area but more people can be moved in a double decker!


While new buses have been added, no new double deckers have been added to the fleet. A cricket team needs to carry a couple of spinners in the team of 11 for balanced bowling combination. In the same way, we need a small portion of double decker buses in the City RTC fleet.

Imagine a double decker bus reserved for women and children from Kukatpally to Koti or from Secunderabad to AS Rao Nagar during peak hours in morning or evening. Can you imagine the difference in commuting in a double decker during a peak hour? It will be a fantastic service to the hard working middle class families that make all the good things happen in Hyderabad!

A double decker driving privilege can be given only to the best drivers, thereby motivating the RTC employees. A higher compensation along with higher standards of safe driving will serve both the employees of RTC as well as create better transport facilities to commuters.

Newer designs will allow better features, accessibility, mileage, and pollution control. Double Deckers running on CNG may reduce the pollution in the city.


You don’t need to run the double decker during non-peak hours. Alternatively, a smaller number of them can be put to use during non-peak hours. Yes, it looks as wastage. As the Guru of Production Planning Eli Goldratt outlines – manufacturing equipment should be designed for peak load and surplus capacity in non-peak load is the investment required for smooth functioning during peak load. Refer to his book ‘The Goal’ for details on this concept.

The vehicles of many people holding positions of responsibility both in Government elected and administrative departments are made bullet proof. They are protected by trained people, where the state spends significantly on training and regularly on maintenance. Compared to home guards and constables having a lathi and a World War I 303 rifle, the commandos and bodyguards get the latest Pistols and semi-automatic weapons. These are all required to be able to protect the small number of responsible people who make the government work. Cost should not be an issue on such important things.

Similarly, Hyderabad may need about 100 double decker buses at most to help make the commute bearable during peak hours. The alternate is a ride called hell on earth. Cost should not be an issue.

Compared to other State RTCs, APSRTC is a pioneer and has done many innovations. Segregating the buses into regular, Veera, Metro Liner, and Metro Express is one example. However, on the double decker buses there is need for more initiative from APSRTC. Taking a monopoly on road transportation in the city without serving the needs is irresponsible, in-human and unethical.

Suggested Reading:
Low Turning Radius of the Car Helps to Glide Through the City Traffic
Cars in India cost twice as much as in the U.S.A.
Increase in Four Wheeler Lifetime Tax
Tata Nano Caught Fire Again
JNNURM Buses Plying on City Roads
Car sales in Hyderabad Were Down Contrary to the National Market
Hyderabad Map – The Best Maps of Hyderabad City!