As per the new government rules, the SSC Board has adopted a nine-point relative grading system, ‘Grade Point Average (GPA)’ for evaluating the performance of the students in SSC Public examination, 2012.

The sum of the points is found and is divided by the number of subjects to obtain the grade scored by the student. The corresponding grade and grade points are as follows. 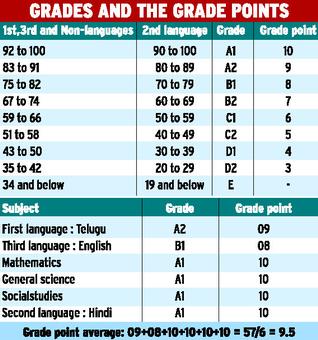 Whether to adopt a grading system was decided in 2005. A committee was formed to suggest grading systems and to reduce question papers.

Benefits of Grades
Government sources say, the new system would cut down loathe and stress on students because now there would not be any senseless competition for higher marks and ranks. It would uproot unhealthy competition among top achievers and reduce societal pressure. It would also address the problem of subjectivity in valuation of answer scripts.

According to academic experts, students scoring 92 and 98 percentage points have the same level of intellect. Marks depend on different factors and do not generally reflect the students’ intelligence. The National Curriculum Framework has taken note of and recommended these points.