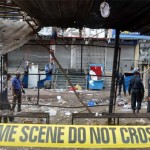 Dilsukhnagar, known for its busy shops, went into grip of fear and panic because of a couple of bomb blasts on 21 Feb. The blasts left about 16 people dead and more than 100 wounded.

The first blast took place around 6.55pm near Venkatadri theatre and the second one took place a few seconds after the first, near Konark theatre. The second blast was much more powerful than the first one. Similar incidents took place way back in 2002. Bicycles have been found to be used for planting the bombs.

The site of the bomb blast was really horrifying and shocking for people who were in the area when the bombs exploded. The injured people were crying for help in pain and agony.

There was blood all over, vehicles were damaged, shops and other establishments were shattered and belongings of people were scattered all over the place. The injured were immediately rushed to nearby hospitals for treatment. Following the blasts all states in the country were asked to be on high alert.

Dilsukhnagar is heavily crowded even at normal times and becomes still more crowded with school/college students, working people going back home, others going for shopping between 6pm to 7pm. Many such people wait for APSRTC buses at the bus stop, the one opposite to Venkatadri theatre.

Dilsukhnagar is a small trade centre in the city. You find shops dealing in a range of things from wrist watches to fruit, clothes, accessories to high end mobile phones. You also find many colleges, coaching institutes and temples.

The blasts have plunged local people into a spell of fear and panic.