The historical monuments in Hyderabad built before 1947 are quite popular among tourists to South India. Equally popular are the tourist spots that were built after 1947 in Hyderabad. Here’s a list. 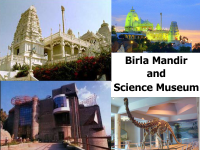 Constructed with white marble, Birla Mandir is located on the hill called Naubat Pahad. It offers a grand and an excellent view of the city. It looks amazing in the evening as it is well lit and illuminated.

Birla science museum is adjacent to Birla Mandir. An important feature of this museum is Dinosorium with fossils of 160 million years old “Kotasaurus Yamanpalliensis”. The museum also has a collection of fossils of dinosaur eggs, fossilised tree trunks and marine shells.