Cool in teens – Coolie as an adult


Do you want to be that COOL guy/gal, popular among friends – wear Ray Ban glasses, punk t-shirt, low-waist jeans way below the hips, ride a fancy motor bike, ‘Chill out’ in hookah parlors, booze till late in the night in fancy restaurants? Better not! You could end up as a drug addict, unemployed or may even land up in jail. You will be a failure in your life.

I am not predicting your future, this is what a decade long research study is telling us. According to the study, What Ever Happened to the “Cool” Kids? Long-term Sequelae of Early Adolescent Pseudomature Behavior published in the journal Child Development, teens at age 13-15 years who try to act older (pseudo-mature) might gain popularity, but they are more likely to have problems with drugs, alcohol and engage in serious criminal behaviour by their early 20s.

Author of the study, Joseph P. Allen, a psychology professor at the University of Virginia stated that, “It appears that while so-called cool teens’ behaviour might have been linked to early popularity, over time, these teens needed more and more extreme behaviours to try to appear cool”. 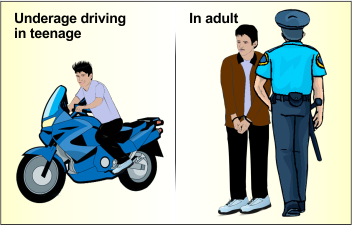 
Effects of pseudo-mature behaviour
Such kids focus on social interaction and popularity, but not on behavioural and emotional maturity. This behaviour diverts their energy from education to unnecessary activities.

The findings of the research
According to the study, teens who tried to act “cool” in early adolescence were more likely to have issues with drugs, their social lives and criminal activity later in life. The research also found that cool kids at school are more likely to end up jobless, addicted to drugs or as criminals.


The study published in the journal “Child Development” tracked 184 teens including 86 male and 98 female middle school students for 10 years period beginning in 1998, starting at age of 13 to 23.

Co-author Joseph P. Allen, psychology professor at University of Virginia, figured out the average “cool” teen, by the age 22 had 45% greater rate of problems due to alcohol and marijuana use and 22% greater rate of criminal behaviour.

Dr Faeza Khan, lead clinician at the Priory Hospital Cheadle Royal in Cheshire, said: “They are trying to impress people about how they are socially, rather than being emotionally mature. “Their interpersonal skills don’t develop. They continue to use the same skills which can lead to involvement with the criminal justice system, or anti-social peer groups, because they’re so keen to be accepted.”

With the above findings, it is very clear that teens who are chasing popularity are actually missing out on a critical developmental period. So if you are a regular person who feels they need to be cool, it’s not a good idea. Better be a regular person so you can have a good future. It is also the responsibility of parents to be aware of this research and use the information to guide the teenagers at an early stage when they are considering to become cool as to help them avoid the negative consequences of pursuing the cool path.

1 comment for “Teens Trying to be Cool, Fail in Their Life: Study”