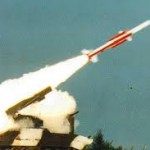 The Defence Research Development Organisation (DRDO), India has successfully test fired its indigenously developed surface–to–air missile, Akash from the Integrated Test Range centre at Chandipur. This is the fifth trail of the anti-aircraft system in the last fortnight preceded by similar trails conducted from the same test range on May 24, 26, 28 and June 1. But on 1 June, two Air Force versions of Akash missiles had been test fired successfully in quick sessions.

Akash is an anti-aircraft missile with a strike range of 25 km and capable of carrying warhead of 60 kgs, and was test fired from a mobile launch complex – III of ITR.

According to the sources, the trail was successful and met all the mission objectives. The trail was a part of the country’s routine air defence exercises and was conducted at 0757 hrs.

The missile, Akash can simultaneously engage several targets with ‘Rajendra’ radar developed by the Electronics and Radar Development Establishment (LRDE), which does the surveillance, tracks the target, acquires it and guides the missile towards it. It is a passive phased array and multifunction radar, capable of tracking as many as 64 targets and controlling up to 12 missiles simultaneously.

Source: The Times of India

← GHMC Seeks World Bank Help to Make City Slum Free
The First NEET to be Conducted in May 2014: MCI →