In 1960s the important necessities of a man in India were considered as “roti, kapda aur makaan” (food, clothing and shelter). But, the scenario has changed in the last 50 years and today, all that people want is ‘a good job’.

It is not only Indians, people from all the countries from America to Africa, cities from New York to New Delhi and neighbourhoods from Warasiguda to Wall Street are looking for good jobs.

A survey by Gallup, (an organisation in America) in 150 countries found that more than anything, people are looking for a good job. Not any other job, they are looking for ‘a good job’. Having a good job is the key to a successful life and bright future. 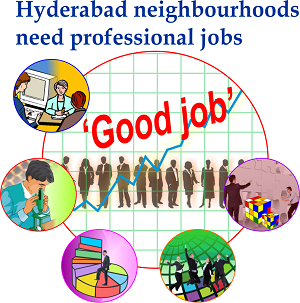 If we fail to create jobs, people in the area will have miserable and hopeless life, they will be shattered. Just as we spend on repairing and maintaining roads, street lights, water pipelines and other infrastructure of the neighbourhood, we also need to spend sufficient effort to encourage existing and new businesses to increase employment.

The leaders of neighbourhood should focus on creating an environment and encourage the creation of jobs, so that it increases employment options of local residents, builds a sustainable local economy that decreases poverty and helps build wealth.

Job creation at neighbourhood level is essential to avoid deterioration of the locality
Not just at a city or country level, ‘good job’ creation has to happen at neighbourhood level. Good jobs change the face of a locality. The local corporator, MLA, government officers, should work on creating a conducive environment so decision makers/entrepreneurs would like to set up offices for creating new professional jobs. Not just politician in power, even the contestant for next election can help change the environment (and earn good name that can help at election time!).

Who are local leaders that can help create new good jobs?
Local leaders need not be the basti leaders. At a smaller scale, a retired school teacher, a professor, a lawyer, a chartered accountant, an employee of a local non-profit organization, an ex-serviceman, colony/apartment association secretary, etc. can play a key role in persuading or helping someone in creating good jobs in their neighbourhood. A retired school teacher with a good name can talk to a neighbourhood landlord and put in a good word about a new generation business doing offshoring work and help them find office space.

On a bigger scale, they could also be retired senior bureaucrats, retired senior managers of PSUs or banks, NRIs who grew up in a neighbourhood and then succeeded in big time abroad before settling back in India or at national level.

What characterises local leaders is that they are self-organised, unelected group of talented people who have larger networks and access to other talented people; they have influence, money and connections. They generally are highly successful, respected and well-known people loyal to their neighbourhood.

Local elders can help encourage a good business idea by facilitating an existing business to open a branch or development centre in local area using their connections as well as guide, encourage and mentor entrepreneurs to create jobs around the neighbourhood.

How a retired professor helped create Silicon Valley
A retired professor, Frederick Terman from Stanford University encouraged faculty and graduates to start their own businesses around Stanford campus in San Francisco, California instead of going to New York to find a job or establish a business. He is the one who encouraged and mentored Bill Hewlett and Dave Packard to start their own business around Stanford, which is now a multibillion dollar company, the HP (Hewlett-Packard). Based on the success of HP, many other companies decided to be based out of neighbourhoods around Stanford.

This small neighbourhood in San Francisco is literally the birthplace of Silicon Valley, home to many of the world’s largest technology corporations. Professor Frederick Terman is considered as “the father of Silicon Valley”.

* Inspired by the book, The Coming Jobs War

You may also like to read:
Need to Incentivize Small and Medium Businesses to Create Jobs in City Centre