Small businesses are major players of job creation and strengthening the backbone of the economy in the various neighbourhoods of the Hyderabad city. They are the fastest growing segment of working people and they play an important role in developing neighbourhoods in the city. Here we are talking about professional small businesses not traditional businesses.

Even, in US, there are 5.7 millions of small and medium businesses and they are the biggest contributors to the American economy and job creation. Every year there is an increase in the number of small businesses in US. In order for our country, in fact, city neighbourhoods to grow and prosper, we need more small businesses in Hyderabad city centre.

Small businesses don’t use up existing tax payers money to get started
Small businesses can leverage the existing infrastructure; they do not require very big buildings. Whereas big companies need a bigger space and that is the reason they prefer to settle in outskirts of the city.

Since small businesses typically are located in the city centre, their employees can leverage the existing public transport facilities. Now that big businesses are located outside the city, new roads have to be laid, new buses should be added and new commercial establishments have to be set up on the outskirts. New sewage lines and water connections need to be laid. New power lines are required and so are telecom cables and internet connections. They suck a lot of investment from existing tax payers for one or two years before they make a net addition to the tax revenue.

Small businesses up-scale a city neighbourhood
As big companies tend to set up their companies in outskirts of the city, there are less chances of development in Hyderabad city centre’s neighbourhoods.

We need to understand the importance of having more of small businesses in city centre because they are the ones that can change the face of a city neighbourhood.

In big companies, most of the senior level jobs are given to outsiders and low end jobs are given to locals. Locals are very much neglected by the big companies. On the other hand, small businesses cannot afford people from outside, it is very expensive and so they prefer local talent and give more opportunity to grow. 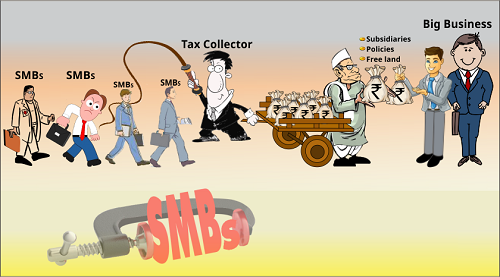